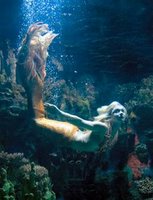 Amazonian sirenas, mermaids, look just like the mermaids of the classical European imagination — beautiful blond women with the tail of a fish, sometimes with several fish tails, who have melodious voices and hypnotic eyes, and who live in caves beneath the waters. They travel on boas. Indeed, sometimes they turn into boas; if the woman sleeping next to you turns into a boa during the night, that is a good sign that you have been seduced by a mermaid. Like dolphins, they can transform into human beings, and seek sex with human men, just as dolphins seek sex with human women. Handsome young fishermen in their boats are at constant risk of abduction by mermaids. That is why some men go out fishing, and never return.

Sirenas will seduce men with their sweet sad songs and carry them off to their underwater world. A sirena sings her songs on a lonely beach, or on a precipice by the water. A young man who hears her song will approach and yield to her, abandoning everything and going off with her forever. The family of the one who has disappeared think he has drowned, but the body is never found; if they ask a shaman, he tells them that the young man has been bewitched by a sirena, and has gone to live with her in her kingdom in the depths. Or the missing person may speak through the mouth of the shaman: “I am alive in an underwater city where there are mermaids and men with fish tails. There are great doctors, and life is beautiful and eternal.”

Both mermaids and yacuruna, water people, can become powerful allies of the shaman. Mermaids can appear in ayahuasca visions singing beautiful icaros, by which they exercise power over the underwater world, and which they will sometimes teach to a fortunate shaman. Like dolphins and yacuruna, mermaids can be powerful shamans, often summoned to aid in pusanguería, love magic. Offspring of humans and mermaids can be powerful healers, who live underwater and can be called among the healing spirits at an ayahuasca ceremony. The word yara is sometimes used to denote a sexually seductive mermaid, with blond hair and mother-of-pearl skin. Don Agustin Rivas tells how, while following la dieta, a beautiful strange female spirit named Yara would appear to him at dawn, lift his mosquito net, and lie down with him. He would awake just before having sex with her.

The term sumi or sume is used primarily to refer to a master shaman who has the ability to go at will into the underwater realms. Thus Pablo Amaringo says that sumis are those able to go under the water, who are “capable of entering the water as if it were the easiest thing in the world.” This is an important skill. The other-than-human persons who live under the water may be willing to share their great knowledge of healing and magic songs with an intrepid shaman. In addition, a shaman must be able to compel them to give up those they have kidnapped for sexual purposes, often using icaros they have learned from the underwater beings themselves.

Don José Celso tells a story of how he almost became a sumi. While he was drinking ayahuasca, a gigantic boa came to devour him; but he hesitated to enter ther creature’s mouth. If he had, he says, the boa would have vomited him into the underwater world. The artist Elvis Luna, commenting on a painting he made of mermaids, says that the mermaids are celebrating because soon a newly kidnapped man will be brought to their world. “They enchant the man with their sublime singing and their beauty. The moment the man is taken underwater the mermaids encircle him as part of his welcome to their world.” But the man they have abducted is in fact an apprentice shaman; he has just two days to establish a relationship with the mermaids in order to get their blessings, their spiritual knowledge. And during these two days he must be rescued by a sumi, a specialized shaman of the water who is monitoring the apprentice. “If two days have passed and he is not rescued,” Luna writes, “the man will experience an eternity in every day that he is underwater.”

Don Francisco Montes Shuña speaks of his uncle, don Manuel Shuña, a banco sumi, who could live and work in the water realm with the mermaids, and who in fact had a sexual relation with a mermaid who taught him many things; and of his grandmother, Trinidad Vilces Peso, a sumiruna who had control over the spirits of the water, could enter the aquatic realms, and transform into a fish, and who died at the age of 108 to become a doctora for the dolphins.