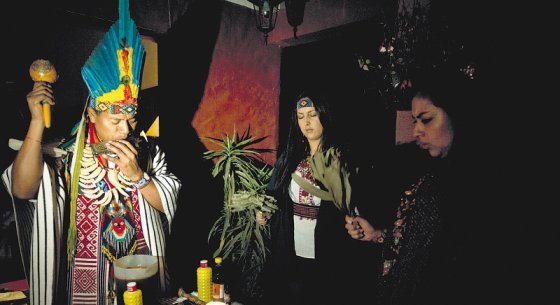 One hundred renowned anthropologists, members of non-governmental organizations, and other specialists who have worked with native peoples in Colombia and nearby regions have signed “The Letter of the 100” an open letter expressing their support for the authorities of the Cofán people in their denunciation of the activities of Mr. Alberto José Varela involving Yajé, also known as Ayahuasca.

In their public pronunciation the Cofán authorities have declared that:

With this Open Letter in Support of the Cofán People, the signees condemn Mr. Varela’s appropriation and fraudulent use of the name and traditions of the native peoples of Colombia, and the Cofán in particular, in order to legitimize his business activities. They also express their concern over the proliferation of this and other business ventures that employ Yajé solely in the interest of making a profit. Mr. Varela’s organization, “Ayahuasca International,” is a particularly shocking case, consisting of a network of interlocking companies, web pages, and Facebook profiles that Varela himself refers to as “the first multinational corporation dedicated to Ayahuasca”:

The signees are not opposed to the expansion of Yajé use per se, nor to the plurality and diversity of its spiritual and therapeutic uses. Instead, they affirm that the diffusion of these practices should always be based on knowledge, respect, and ethics. The activities of Albert José Varela represent a danger not only to those who take part in his organization’s ceremonies, but also, more generally, to the expansion and consolidation of these practices beyond their region of origin.

AN OPEN LETTER IN SUPPORT OF THE COFÁN PEOPLE

AND AGAINST THE ACTIVITIES OF ALBERTO JOSÉ VARELA

PDF Version of The Letter

Originally published in English by Africa is a Country Blog

We hereby manifest our support for the representatives of the Cofán people who signed a public denunciation against Mr. Alberto José Varela and his commercial activities involving Yajé.

In their denunciation, they point out that Mr. Varela does not have the permission or approval of the Yajé authorities of Colombia to transport or use the Yajé medicine; that they have not trained or instructed anyone from Mr. Varela’s organization, including Mr. Varela himself; and that he was not granted authorization to commercialize Yajé. By the same token, they note that Mr. Varela has made no economic investments for the benefit of the Cofán community, nor for the preservation of their culture and traditions.

The undersigned manifest our concern over the proliferation, in Colombia and many other countries, of a business model in which Yajé (also known as Ayahuasca) is used solely in the interest of making a profit; disrespecting the plant, its proper management, and the sacred character bestowed upon it by native peoples and mestizo populations of Southeastern Colombia.

The activities of Mr. Alberto José Varela are especially worrisome because he claims to have been “initiated” in 2001 by Taita Domingo Males Miticanoy, calling himself “the first Westerner authorized to use the ayahuasca of Taita Querubín in Europe,”  and referring to his organization, Ayahuasca International as “the first multinational corporation dedicated to Ayahuasca.”

Between his so-called “initiation” and his arrest in Spain in 2008, Mr. Alberto José Varela conducted Yajé ceremonies in Colombia, Spain, and other countries, claims to have trained therapists “according to the instructions of Taita Domingo,” and sold Yajé to participants after ceremonies so they could consume it in their own homes.

In 2007, Mr. Varela founded the Putumayo Association for the Assistance of Indigenous Peoples of the Amazon, which he uses to organize trips from Spain to the Dept. of Putumayo, Colombia, and through which he collects money with the supposed aim of giving economic aid to indigenous peoples of southern Colombia and providing “needy communities with materials such as clothes, shoes, toys, and books.” The Putumayo Association also seeks to purchase land in the Colombian rainforest to allegedly collaborate with indigenous peoples in restoring it by “planting traditional crops and elaborating shamanic medicines which are the basis of their medical culture and their means of sustenance.” By 2008 the Putumayo Association had purchased five hectares of land in the Colombian Amazon.

Mr. Varela was arrested in Spain in December of 2008, after a police investigation initiated by complaints filed by family members of participants and neighbors over the disorderly conduct generated by the Yajé ceremonies he conducted. After fourteen months in prison, he was absolved in April 2011 of any crime against the public health because, as noted in the court’s sentence, it was not possible to quantify the DMT content of the Yajé confiscated by police. According to news reports, 40 kg of Yajé were found at his home.

In 2013, Mr. Varela resumed the same kind of Yajé activities he had carried out prior to his imprisonment, now using aggressive marketing strategies and investing significant amounts of money in advertising and social media.

To expand his business, he provides “training” for facilitators after only one to a few weeks long course through what he calls the “European Ayahuasca School”; these people – some without the least experience or training – then organize and conduct Yajé ceremonies.

It so happens that the founder of this “school” claims that he does not consume Yajé any more, because, according to him, he no longer needs to; he also prohibits facilitators from taking the medicine while they are conducting ceremonies, which runs contrary to the principles followed not only by Yajé traditional medicine practitioners, but in all contexts of Ayahuasca use we know of.

Mr. Varela has created a business model around the Yajé ceremony involving a network of businesses, web pages, and Facebook profiles designed to protect him legally from further complaints. Yajé is prepared on lands bought by the Putumayo Association and then distributed to facilitators who are “contracted” by one of his companies, “Inner Mastery International.” Trips to the Colombian rainforest are sold through “Ayahuasca Travels,” and Yajé is sold directly over the Internet through the company “Ayahuasca Planet.” All of these business activities are carried out by means of various intermediaries.

Given all the aforementioned, we the undersigned declare as follows:

We the undersigned are not opposed to the expansion and spread of Yajé usage per se. Instead, we affirm that the diffusion of these practices should always be based on knowledge, respect, and ethics. The activities of Mr. Albert José Varela represent a danger not only to those who take part in his organization’s ceremonies, but also more generally to the expansion and consolidation of these practices beyond their region of origin.