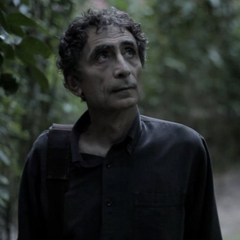 The jungle Prescription – Film Trailer from The Ayahuasca Project on Vimeo.

Premiering tonight in Canada on CBC’s The Nature of Things, (8pm EST, November 10, 2011) The Jungle Prescription tells of ayahuasca, the visionary Amazonian brew of indigenous origin and its encounter with the West, as played out through the story of two doctors. The first, Dr. J. Mabit, runs a legendary detox centre deep in the Peruvian jungle, in partnership with indigenous healers. The second, Dr. Gabor Maté, is risking his reputation trying to establish a similar program in Canada. Through the intimate stories of these doctors and their patients, we see how an ancient medicine causes cathartic, life-changing insight, and we witness the commitment of people who have devoted their whole lives to applying this medicinal knowledge.

As anticipation for the documentary grows, so has media attention. In particular, Dr. Gabor Maté has recently appeared in major Canadian media, such as CBC News, The Globe and Mail, The Star, and the popular CBC Radio program “The Current”, speaking eloquently, with calm, poignant passion about his work and experience with ayahuasca and addiction. Subsequent to media attention, Dr. Gabor Maté has since garnered the attention of  Health Canada, who have ordered Maté to stop treating addicts with ayahuasca.

When ayahuasca appears on mainstream television, especially a program as storied and respected as The Nature of Things, which debuted on CBC on November 6, 1960, and has been hosted by David Suzuki since 1979, there is often required a double-take, a closer look, perhaps a strange and uncomfortable fascination. Something akin to seeing your grandparents on Facebook.

However, in this case, The Ayahuasca Project; the documentary film; the entire situation – from the sweeping support and excitement of those familiar with ayahuasca, to the healthy intrigue and questions of those who may not be familiar, to significant mainstream media attention, and government involvement – has gently, with calm purpose opened and advanced the discussion and awareness of ayahuasca – in a broad context, to wide and diverse groups of people – with, importantly – utmost respect to the plant, the traditions surrounding it, and significantly, with great respect and care for the people who come, or may come, to drink ayahuasca.

Clearly there exists now the opportunity to build numerous bridges across old, deep and dark chasms, across worlds, perceptions and presumptions, beyond barriers both legal and cultural, even, perhaps, beyond belief  and beyond words to places, as Dr. Gabor Maté has described, that “enliven and invigorate our natural healing capacity”, as individuals, as communities, as nations, as a planet.