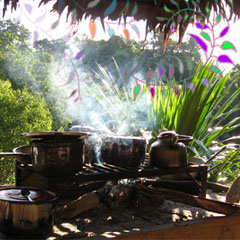 “As we begin (once again) to naturalize ourselves – both nutritionally and medicinally – we may begin to discover that there is far more to a plant than just its chemical composition, more than just its list of constituent phyto-nutrients, vitamins and minerals. Rather, and more vital to our personal healing – as well as to the continuation of life as we know it – is our becoming acquainted with the organism producing the food or medicine itself. With the life-form, the being”

Visionary Nutrition. This is a path of uniting stories. An open source invitation into deeper relation with the many things that fuel, heal, and energize us; that which is alive all around us, co-creates with us. This a path of dissolving separation. A path of connectivity.

It is the strengthened engagement with the harmony of humanity – the beautiful songs we’ve sung and are singing, our peak performance, the best of the best – that boils down to our collective necessities – food, medicine, life – from which can be drawn ever-expanding analogies, inter-elated metaphor, and metamorphosis.

It is here all around us; Eden, Heaven – find it in an apple. Got Demons? Join forces with a vine. Eat garbage conjured and sold by the darkest magicians – become “Stay Puft Marshmellow Man”; your ill-conceived nightmares. Invite the forces of nature, say an orange or a mushroom, and with the right kind of eyes – grow further infused with infinite ecologies of everlasting spirits.

“What ayahuasca teaches is that right now, at every moment, we already live in the magic forest”

Dig around a bit, and you might observe the root of our crisis as being humankind’s long, drunken lust for separation – mind/body, human/nature, food/medicine, physical/spiritual. Simultaneously, it these elements which unite our species, and always have. We all participate, we all dance with these elements – and it is these elements that, by and large, make up our world. We create worlds, as worlds creates us.

But we are new here – sometimes awesome, but ultimately amateur, and we’ve been grasping. We simply cannot believe it. Timelapse the situation and it’s like we appeared only yesterday – instantaneously – in ever-changing form, on a particular planet. Growing in size, staring at our hands, finding our feet, rubbing our eyeballs, mind boggled – immersed, surrounded, and face to face with an overwhelming presence perceived, at times, as threatening.

We dash for the door, or some way out. We invoke separation, like children covering their ears – convinced it’s not happening. Running in circles, making mirages, chasing dragons, ouroborically awestruck, deaf, blind and dumbfounded by this life, the afterlife, reality and its alternatives, ghosts, dreams, philosophy, the powers that be, the secret life of plants – all this raging intricacy.

Yet we appear now to see eye to eye with the storm. This quiet, ripping whorl, where time is in question, and of its essence. Where the consensus amongst the conscious is that we are indeed all one, we are nature, there is no separation, and it’s all changing dramatically. Be it homo nexus, homo luminous, neo aboriginalis, or Sylvapolitans – it’s on, and it’s your choice. Merge with the Maelstrom, let Gaia absorb you. Produce solutions – dissolve.

All plants are psychoactive. Everything has a spirit. You can learn a lot from Arugula – even more from Cacao, or from an elder like Maize. What we place inside ourselves, transforms us. Eating and drinking is intimate communication. Daily comm-union, even telepathy, most often one-way, where a plant invited into the human body as food or medicine can “see what you mean”. From it nothing is hidden and it knows what’s what – so it provides certain answers in the form of nourishment – literally; “bringing (you) up, raising, fostering, supporting, preserving”.

Be it food or information – we become what we consume, and we produce from the inside out. When we eat and drink – we practice relationship with different forces, with spirits and sentience. We are what we eat, and what we eat runs the show.

Plants, fungi and bacteria are significantly adept at piloting humans. Michael Pollan, for example, explores this extensively and convincingly in his work, posing the question: “What if we are all just pawns in corn’s clever strategy game to rule the Earth?”. Further, Pollan suggests, in his “Plants-eye view” Ted Talk, that “Looking at the world from other species’ points of view is a cure for the disease of human self-importance.”

If plants – specifically Teacher Plants – convey anything, it is that they have the upper hand, the higher branch. They can throw you down, clean you up, send you out to space, thrust you on a new paths, make you change your ways, whisper advice, keep you warm, dry, sheltered, alive, and in some cases, even kill you.

Essentially, plants can do whatever they want with humans, and with near- absolute impunity. Our species’ “ultimate verdict” is the concept of death. But to a plant, death is laughable. A sentiment reinforced in a recent New York Times Magazine article describing the plant take-over of New Orleans’ Lower Ninth Ward, where “For six and a half years, the neighborhood has undergone a reverse colonization — nature reclaiming civilization.”

Have you ever seen plants happen? Plants, and plant-time, are like crop circles (which of course are made of plants in most cases) – like magic, they appear, leave traces, clues, fruit, messages. In the New Orleans “Jungleland” – behind climates of chaos and the media newsfeed, burnt cars and dead bodies are consumed by tall grass.

Side with the plants, learn plants, eat plants, become plants – let food be your medicine, let medicine be your food – and begin to synthesize entirely different dimensions of time, technology, communication, and potential.

“In order to live a magical life, you have to eat magical food”

Several years ago, during dieta with Ayahuasca, the plants suggested to me that “ayahuasca would go best with raw food”. Plants, I’ve found, often speak in terms of one’s present perception – in shapeshifting symbols that change as you follow them, conversations to discern and decipher. With this in mind, I set forth exploring a raw food diet – with sharp eyes and a healthy aversion to dogma and definitions. However, the heart of this guidance was clear: Ayahuasca, once drank, prefers to live in, and works better with; clean bodies.

I eventually engaged and evolved my raw food/living diet path as a kind of inverted version of a Plant Dieta. Something I could practice daily as a way to learn from, and build relations with numerous “common” plants like Kale, Chard, Chia, Blueberries, Tomatoes, Pears, for example. As process of turning myself into some kind of garden. Into which, ayahuasca digs deep, purging junk, transforming thoughts, composting things, creating soil from soul, turning the stomach into a womb, encouraging conditions right, good, and fertile – so it can root, grow, and flower.

Raw, living diets take many forms. From my perspective it’s a kind of plant artistry. Plant-based edible living sculpture with vibrant living beings who in return sculpt you. Essentially though, it is process of healing and strengthening. Significantly, it’s a cleanse – of body, of mind – and by extension, environment.

From yet another direction, the “higher reflection” in a sense the Mother of  living diets, can be seen in the traditions and disciplines of Plant Dietas. Commonly referred to and often mistaken as “the ayahuasca diet” – Plant Dietas are, in very general terms; a discipline and process of cleansing, purging, healing, learning, and building right-relationship. During Plant Dietas, one is isolated, eats very little, and/or very simply, in order to remove distractions, sensitize one’s body/mind/spirit to the subtleties of the spirit world, to become transparent, lucid and focused in it. A student-teacher relationship emerges as one sits with a plant, drinking it exclusively over a period of time.

Working safely and respectfully with Ayahuasca and other Teacher Plants, alongside living food/garden-variety plants, the Teacher’s Assistants so to speak, leads, of course, to many physical and spiritual benefits. The plants led me out of concrete jungles, away from concrete ideologies and crumbling health to hold my gaze and engage my commitment to unfolding endeavours of evolutionary advantage – wild foods, living water, permaculture, forest gardening, medicinal mushrooms, herbalism, synaesthesia…

Yet perhaps most importantly, the process has opened, and continues to expand, a certain grand permeability – pathways and bridges between common ground and the sky – between day-to-day and ceremonial nights.

“I think that once a person is aware of the life in everything, they can begin to access the spirit of everything. And once they can do that they can interact with those spirits. I’m talking about the spirit of the creek, the bricks in your house, the hundreds of spirits roaming your kitchen.

This universe is full full full of life and life force. The roll of shamanic knowledge for us westerners introduced to those spirits is to spread that knowledge, make communication easier. And if we can do that–a big task, no doubt–then the way people interact with the world and the spirits of the world and universe will change, automatically, from one of dominance to one of cooperation. And when we, mankind, begin interacting with the world, rather than trying to dominate it, well, I think mankind will be better off. The world and its spirits don’t really care if we do, for the most part. Trees will be here long after we’re gone, and so will stones and bricks and clouds and the moon. So it’s really up to us to take an interest if we are to make the friendship of those spirits.

And thus far, for most of us throughout mankind’s short history on this planet, that effort has not been made. Which has left us losing out on so much we might have learned. Who knows what we have missed simply by not asking a plant what benefit it might have for mankind, rather than saying “tree, chop it and burn it for fire.”

I think the universe has all the secrets of the universe. And our arrogance in trying to continually conquer the universe rather than communicate with it, has kept us from being taught those secrets. And how delicious they might be!”