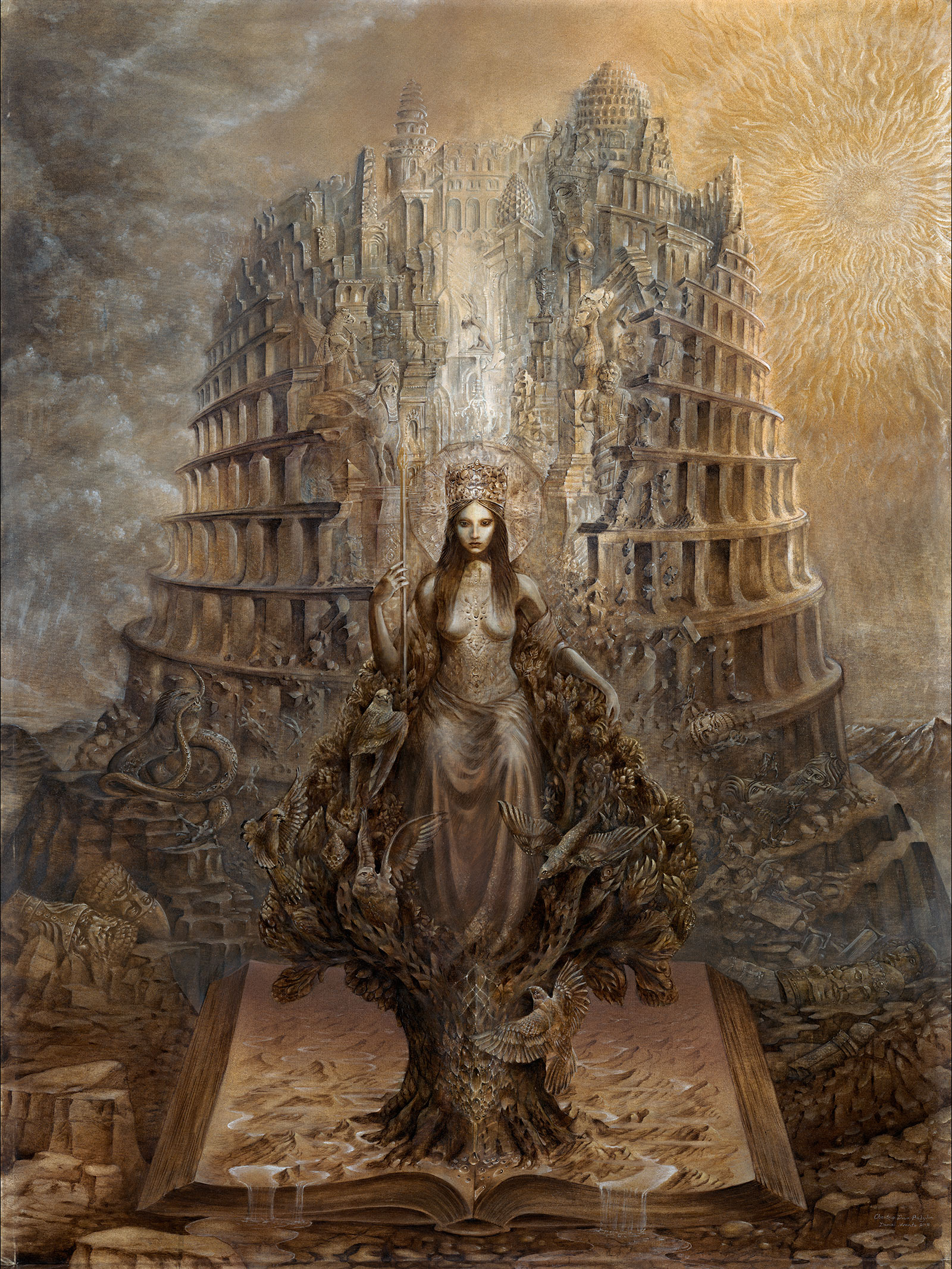 The earth is a living testament, like a book, who’s pages are the aeons of history. The organic pattern of history explicates from seed and nut into frond, bough, leaf, tree.

The tree takes different branches and pathways, and upon its branches fly the eagles and subtle birds of winged thought, angelic powers that belong to an immortal tradition – the language of the birds, the mysterious patterns of the hidden prime, the conveyors of the inspiration of gnosis. The image of woman crowns this creation, Sophia, the White Cedar, unveiling, seizing the rod of sovereign creativity.

“I am the honoured one and the scorned one.” For as she is enthroned upon the tree of life, she also laments, chained in the towers of the archons, “I am the whore and the holy one.” She sells herself on the pavilions, and even the upper holy chambers of the ziggurat; “I am she whose wedding is great, and I have not taken a husband.” initiating archontc powers to the sacrificial universe in the sovereign syllables of her love cry, the cthonic vowel utterances of female ecstasy.

“I am the voice whose sound is manifold, and the word whose appearance is multiple. I am the utterance of my name.”

The tower becomes an ornament of wisdom-mind, and she the pearl within this oyster. “I am she who cries out, and I am cast forth upon the face of the earth.” In seismic tremor, vast cascades of the tower fall to earth as it is simultaneously re-built. “Why, you who hate me, do you love me, and hate those who love me?” The great capstones and minarets and golden heads of great kings fall to the ground to kiss the Earth.

On the periphery of the Tower, the lion headed serpent, the architect, bites down upon its own tail, roused to blood fury by the taste of its own flesh, begetting itself in self-incest, a recursive loop of self-aggrandisement, experiencing primal fear at the unveiling of Sophia-Wisdom. And she councils:

From this axial place, the waters of life flow from the root-elements, the most fundamental expression of the humility of Sophia. She flows through the earth, always sublimely beautiful, passive poetry to the amorous cling of gravity, pulling her toward invisible centres. And by primal tongues of fire, licked into vapour, steam and air, to sacrifice herself in an everlasting gifting through the rain and the jewels of morning dew, which will bring the desert into new life.

The Quotes of the Voice of Sophia included in this piece are from
Thunder, Perfect Mind – a gnostic gospel of considerable antiquity.

Daniel Mirante is a painter, teacher and writer based in the United Kingdom. As well as exhibiting and speaking internationally, he is a member of the founding faculty of the Vienna Academy of Visionary Art (www.academyofvisionaryart.com) and of the UK based Art Pilgrim project (www.artpilgrim.net). His work is inspired by ceremonial work within traditional cultures, including with the master plants. He describes this work as “An emblem of the Sophia, the wisdom-of-life, breaking free from the enshellment of the idols and archons of our own dreaming”.

Chanting Down Babylon is his latest work, and the video shares some words around the meaning and symbolism of the piece.